There are many ghosts that lurk in the Poortgebouw and we are certain that one of them is old Lodewijk. 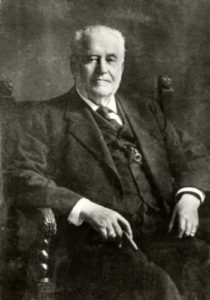 Rotterdam merchants were at first hesitant to enter the Industrial Age, but in the 1860’s they discovered they could profit off the River Maas’ connection with the Rhine. The city council decided to exploit this position by developing the south bank into harbour terrain (1863) and the dredging of the Nieuwe Waterweg (1866) connection from Rotterdam to the North Sea. From 1870 onwards the local government started an investment programme, pushed forward by Lodewijk Pincoffs, a successful merchant and wealthy member of the city council.

In 1872, with German and Belgian capital, he founded the Rotterdam Trade Association (Rotterdamsche Handelschvereeniging) in a deal with the city council to develop the South Bank in exchange for ownership of the land. He did this strategically with knowledge of the plans for the Willems Bridge (Willemsbrug, 1877) connecting the old city with the south (and beyond) by rail and road. As first steps towards Rotterdam’s reputation and the “World’s Largest Port”, the Binnenhaven and Entrepothaven were dug in 1873 on the RHV terrain. The Koningshaven (1876) would create the Nordereiland—formerly the tip of Feyenoord—which facilitated the construction of the bridges. Amongst the various warehouses and cranes would come the monumental constructions of the Vrije Entrepot and the Poortgebouw.

The RHV had lofty ambitions. Pincoffs founded the African Trade Association (Afrikaanse Handelvereniging) which later would suffer huge losses in Africa requiring much capital from the RHV to keep it afloat. With debts adding upon debts, the RHV was declared officially bankrupt in 1879. In the same year, the construction of the first monumental office for the RHV, the Poortgebouw, was completed. Pincoffs fleed Rotterdam emigrating to America, leaving behind an 8 million guilder debt.

Lodewijk Pincoffs was a visionary businessman. He was the co-founder of the Rotterdam Bank, Holland-America Line and the Dutch-East Indies Gas Company (Nederlandsch-Indische Gas Maatschappij). His social functions included being a member of City Council (1856-73), a member of the Provincial States of South Holland (1858) and being the first Dutch-Jewish member in the House of Parliament (Eerste Kamer).

A bronze memorial statue of Pincoffs stands before the Entrepot bearing the engraving:

“A Spectacle of so much Glory, and so much Shame” 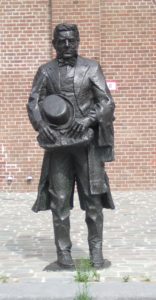 Sometimes we rub his money bag for good fortune. 🙂 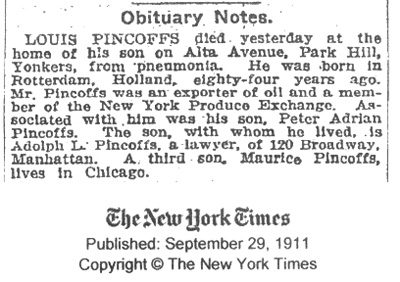