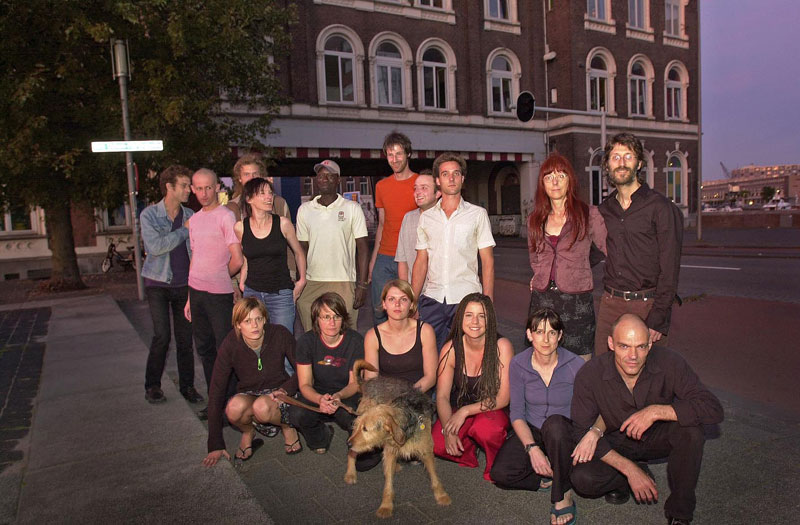 For the Vereniging Poortgebouw, a living group and the legal renters of this monumental port building in Rotterdam for the past two decades, a much anticipated moment is at hand. The new owners de Groene Groep, who bought the building for the mere price of a single family home in 2001 (± 350.000 euro), have announced the termination of the rent contract per February 2005. With the 25th anniversary of a unique social experiment approaching, the Poortgebouw is now threatened to be emptied out to make way for a redevelopment into commercial office space.

In 1980, the Poortgebouw was squatted in protest of the severe shortage of living space in Holland. The founding members of our group wanted to transform the abandoned office space into a liveable house with a youth center (jongerencentrum) for activities such as a café and information point about squatting. After much negotiation, the municipal government officially endorsed a plan in 1982 proposed by the inhabitants where communal facilities and “zelfwerksamheid” (self-maintenance) on the inside of the building could result in an affordable rent. The “Vereniging Poortgebouw” (association) was founded in September 1982 as the official organisation for the living group to renovate and later rent the building from the Rotterdam government. All parties involved were extremely satisfied following the renovation and the first rent contract was signed in May 1984.

Since then, the Poortgebouw offers a free space for an international living group of artists, musicians, students and a broad range of other professionals to actively propose and test diverse models of living and working together. The once forgotten port building became a haven for alternative cultures and a meeting place where we host non-profit social, cultural and political discussions and activities that might otherwise not have a space in Rotterdam.

In contrast, cities such as Rotterdam are becoming increasingly anonymous and alienating urban environments designed to satisfy the standardized needs of the many. The rare social model currently in practice within the Poortgebouw is not nostalgic rather a progressive example of an open social structure which encourages communication between individuals to solve problems as a group as opposed to relying on the public money of an eroding state welfare/social system. The inherent value of this system internally and for the city can not be measured by economic profit.

In July 2001, the Woningbedrijf Rotterdam (WBR), the semi-privatized manager of government property, sold the Poortgebouw to the clearly profit-oriented developer, de Groene Groep, without our knowledge or presenting an opportunity for our association to buy it (at such a good price!). In the current market climate where the government rigorously encourages private investment into city development, the Groene Groep’s exploitation plans for the Poortgebouw are clearly supported by the city government that once cooperated in making our living space possible. (see Huuropzeggingsbrief). Indeed, the times have changed but is another office space in a city full of empty office buildings really more valuable now for the City of Rotterdam than a unique living concept?

Earlier, the Poortgebouw was surrounded by an abandoned landscape of port sheds and factories which since then has been masterplanned into an expensive housing and commercial district, the prestigious Kop van Zuid. Through the years, we watched through our windows as the building blocks rose from the mud and the asphalt slowly paved it’s way to our front step. Any alternatives to this top-down planning, such as the former public garden designed by architects living in the Poortgebouw, were doomed to be overwritten by the cold rigid order of this masterplan.

At the same time, the facade of the Poortgebouw, contractually the responsibility of our owner, slowly fell into disrepair becoming a great concern not only for the public but for us as well. The Groene Groep’s contradictory claim that NOW the national monument urgently needs to be renovated is a result of the fact that in the past decade neither the previous owner, the Woningbedrijf Rotterdam, nor the Groene Groep fulfilled their responsibilty to take the appropriate actions to address this growing concern.

The Vereniging Poortgebouw would also like a renovation for the Poortgebouw but imagines a plan which would take into consideration the social and cultural benefits of group living forms to the city of Rotterdam as opposed to one driven solely by economic profit. We do not want the Poortgebouw to suffer a similar fate as the monumental Entrepot building. A collosal misplanning of this historic property into a supermarket and the -now abandoned- monoculture of posh restaurants is currently under it’s second redevelopment in 10 years. Although we may not be included in the Kop van Zuid’s vision of the “City of Tomorrow”, we offer our experience in this building and neighbourhood combined with our professional network and would like to continue contributing to their promises of “diversity” for this new neighbourhood.

The Groene Groep has unfortunately rejected the possibility of collaboration with us on a future for our home so far. Without the cooperation of the owner, our alternative renovation plans for the Poortgebouw with a socio-cultural function are unrealistic. We find ourselves currently in a legal process against the heavyweight lawyers of the Groene Groep where a judge will decide whose need for the Poortgebouw is more justified. In the worst case when we have to leave this building in our 25th year to make way for their plans, we want to continue the experiment of our group living and activities only in a suitable replacement location in Rotterdam .