On Friday night, October 3. 1980, the Poortgebouw was squatted.

The building had been left abandoned —like so many others in the city— unavailable for legal alternative uses with the exception of a publicly-rejected plan for an Eroscentrum (1979). In Holland, it was (again) a time of a desperate shortage of affordable housing.

As part of a nation-wide protest day against the “Leegstandwet”, various youth and squat groups assembled in Rotterdam under the name “Wij Jongeren Eisen” to demonstrate for autonomous-run youth spaces through marches, barricading bridges and squatting empty buildings. The squatters of the Poortgebouw were members of the “Rotterdams Overleg Kraakgroepen” (ROK) who, although operating independently in the city for a longer time, timed the squat during the context of this protest. The police were quick to the scene but left within 20 minutes as the kraak was professional and legal.

Posters with letters spelling “GEKRAAKT” (squatted) were placed in the windows proclaiming the new use of the Poortgebouw. A press release was available the next day stating their intentions and asking for solidarity. 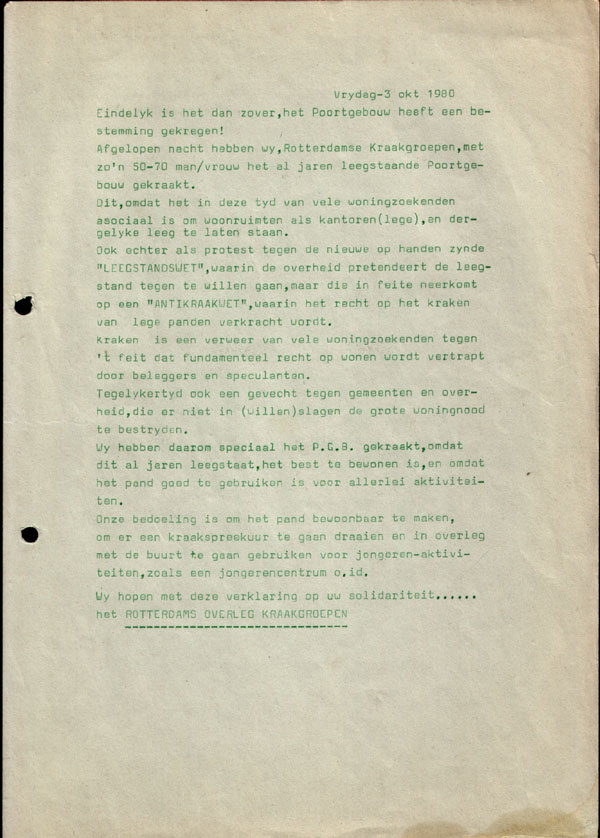 First intended as an “actie-kraak”, the squatters for a number of reasons chose to stay. They wanted to make the Poortgebouw liveable, transforming it from abandoned office space into an autonomous zone, a youth center (jongerencentrum) with housing and socio-cultural and political activities such as a café and information point about squatting. They believed in the benefits of more social/communal forms of people living and working together as opposed to what was offered in the city and world around them. 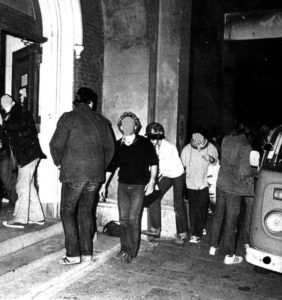 On October 7, the owner, the City of Rotterdam, decided that the squatters could be tolerated (gedoogd) as they had no immediate plans for the Poortgebouw following the failed Eroscentrum concept. But a key factor was that the City Government intended for the Poortgebouw to be developed for youth-housing (jongerenhuisvesting).

In mid-November, the squatters-cum-living collective met with the city government and proposed that they would like to renovate the building themselves. Their objective was to adapt the building into “Van Dam eenheden” but under their own management (eigen beheer) as this would cost less and offer lower rent. The City was skeptical of the squatters’ plan fearing that they could not get the necessary subsidies for the renovation from the state in this situation. It was decided to tolerate the squat of the Poortgebouw until the 31st of August 1981 at which point they should leave.

For the next months, it was an uncertain stay for the new inhabitants. They protested that the suggested rent of 86,300 Gulden was too high and stayed true to their belief that their concept would be more efficient although no concrete plans were received by the City. In this time, the inhabitants also organized several public activities. 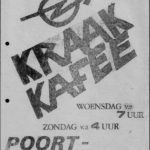 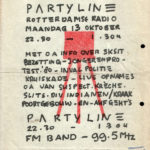 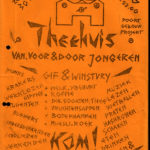 In mid-September 1981, when the Gemeente publicly announced their “subsidisable” plan to rennovate the Poortgebouw into 1 and 2 person apartments (HVAT-eenheden), the squatters still remained steadfast to their ideas and had not left the building. The City announced but did not forcefully evict them from the Poortgebouw as they feared similar violent scenarios between police and squatters as were happening at that time in Amsterdam (Amsterdamse Toestanden).

Timely mediation by the management from the “Projektburo Feyenoord” resulted in an Overleg Groep consisting of the inhabitants, Volkshuisvesting Feyenoord, Volkshuisvesting Rotterdam, the Gemeente Rotterdam (with the Acadameie voor Bouwkunst). From October 12, there were constant meetings between the various parties with many difficulties, near-evictions and cancelled appointments.

Coincidentally during this turbulent time, the National Secretary of Volkshuisvesting Van Dam said at the opening of a HVAT-exhibition in Rotterdam that squatters also have good ideas and strategies about housing and self-management. This would lead to an adjustment of HVAT policy to include self-management, a so-called HVAT-2 option, which could better address the needs of homeless youth and those urgently searching for a place to live.

By March 1982, the document “Wonen in Het Poortgebouw” was completed to the satisfaction of the involved parties with blueprints for a renovation into 24 one-person and 4 two-person living units with shared utilities. the inclusion of “zelfwerksamheid” (self work) lead to a total cost calculation of the renovation which would keep the rent to 100-150 Gulden per person, half the sum of the government plan. The Vereniging Poortgebouw was founded in September 1982 as the official organisation for the living group to renovate and later rent the building from the Rotterdam government.

On 28th of October 1982, the City Council, although still skeptical of dealing with squatters, legally approved this document as a “one-time experiment” and agreed to go ahead with the renovation plan as developed by the Overleg Groep. The first rent contract would come into effect in 1984 when the renovation was completed according to the mutual agreements.