Kop van Zuid — Approximately two weeks ago, members of the Vereniging Poortgebouw constructed a banner for the facade of the building to express their shared feelings about the impending war on Iraq. The banner was inspired by a graphic by De Designpolitie printed in the Volkskrant on November 21, 2002.

On Monday morning, March 17, two policemen knocked on the door of the Poortgebouw threatening the residents who received them with a demand to remove this banner immediately as it is disturbing the “openbaare orde”. Otherwise, a crane would be arranged to remove the banner at the costs of the inhabitants. 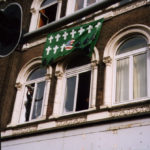 A request for their identification resulted in the mere presentation of handwritten names on a generic photocopied flyer from the Politie Rijnmond. To the question of who authorized this action, they claimed the orders to have be sent “from the top”: by Mayor Opstelten, the chief of the police and the provicial government. (Wow, we must be really important!). These powerful authorities were obviously not able to equip their executors with a single official document (gerechtelijk bevel) which are there to authorize/authenticate such a legal order.

In response to the intimidation of the police, it was decided to remove the “terrifying” banner. But only momentarily. Promptly calling TV Rijnmond to document this estranging incident for public knowledge, the banner was then returned in place with an additional improvised banner atop it saying:

“CENSORED BY YOUR TOWN HALL”

TV Rijnmond, having filmed this action, also discovered upon deeper investigation that there was no decree of any form having been given by the Mayor… atleast that’s what Mr. Opstelten or his official entourage stated to the journalists. Another contradiction in the statements of the officers was revealed by the research of a correspondent in the Volkskrant: He reported that the police told him that it should be a “pre-emptive action” against possible public escalations. This is clearly a different legal case than “verstoring van de openbare orde”.

At the present moment, we are not certain at any time if this crane will arrive or not. Our beautiful banner still hangs on the facade of the Poortgebouw and, if nothing else, inspires passers-by to have a thought about what’s going on in this world.

Herewith, we want to express publicly our objection towards the intimidating methods of the executive (those executing the laws) of this city. We are highly suspicious of a police force that uses disinformation and blatent abuse of authority against engaged Rotterdam citizens that solely employed their right of free speech without endangering the security or peace of the public sphere.

We hope that you share our point of view and might help us in form of spreading this story with your means of communication and BE THERE yourself to solidarize, protest or just witness further actions when it should be necessary ! 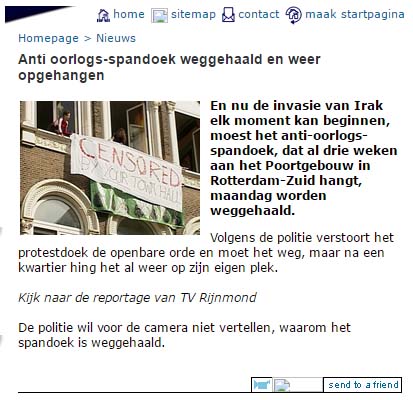